Loncon 3 was the 2014 Worldcon in London, UK. The Loncon 3 Pigeons were a community project that primarily happened before the convention. Here’s some information on the project, provided by Shana Worthen:

London has pigeons, obviously. That connection was turned into a fun project that got people to make their own pigeons pre-convention. The resulting pigeons acted as Loncon 3 ambassadors around the world, being photographed on their travels. The proof of this lives on their Pinterest page. Pictures of the pigeons on their travels were part of Loncon’s display at LoneStarCon 3 the year before Loncon 3.

Serena Culfeather, who ran the Loncon 3 Art Show together with John Wilson, designed the pattern for the pigeon. She made it available to others, and also put together kits. There was a pigeon making workshop at the 2014 Eastercon, where lots of people started their pigeons, finished them at home and sent them back to the convention.

At the convention itself, the pigeons became part of the Guest of Honour display for Robin Hobb/Megan Lindholm, which featured a mannequin dressed as the Wizard from Wizard of the Pigeons, sitting on a park bench. The pigeons congregated at the Wizard’s feet. That display was put together by Farah Mendlesohn.

We had four Ambassador Pigeons in red, white and blue who went to different parts of the world for adventures. I made a leather, steampunk version and also a Pearly King version to give to Robin Hobb. We made up pigeon packs where I basically got a kit together with EVERYTHING you would need and these proved popular. I expected that people would be more inclined to make pigeons if they had more than a downloadable pattern. Some packs had pre-cut out pieces and others squares of felt. I like working with felt and I think it’s an easy medium for all levels of skill to work with. It was also a deliberately simple pattern and by creating it myself I avoided any copyright issues.

Having quite a few pigeons already made at the start seemed to encourage people to make them and at a few conventions ahead of Loncon we had workshops where you could make or start to make a pigeon or two. This worked well and inspired people to be quite creative with colours and styles as they saw what others were doing. I took pigeons with me everywhere and at one convention they came along in a small wicker pet carrier!

Everyone likes to show off their creations so inviting people to send in photos of their pigeon worked well too. This was the The idea behind the Ambassador pigeons was based on the concept of Flat Stanley. The more that are shown off, the more people want to join in. In some cases, pigeon makers were too fond of their pigeons to bring them along!

Worldcon has been over for more than a month now. I’ve had time to reflect on the things that we did in the run-up to Dublin 2019, and am still marveling at everything that happened at the convention itself. The Raksura Colony Tree turned out to be much better than I had imagined, and brought together a community of crafters. As the convention neared its end, I talked with a lot of people inside that community as well as others who enjoyed what we did. We discussed what it is that makes craft opportunities so important at a huge event like a Worldcon. There’s many good reasons I’ll discuss in a future post, but one thing we were all agreeing on is that we want projects like this to be part of future Worldcons as well. And since just wishing something into reality only works in fairytales, I want to provide us with a place to discuss ideas, document things that have been done and provide a bit of continuity in this area, which in particular for Worldcons isn’t easy to create, with a new team taking care of things every year.

For the moment, here’s how I see the scope for this blog: community art projects that encourage creating things together, as well as other self-directed craft activities that can be offered, such as colouring pages or origami. Those have some of the same benefits for people at a convention as the community projects while often being easier to organize, which is why I’d like to include them.

In the next weeks, I’ll slowly reorganize this page to reflect its new, extended mission. I will keep the name, since it is kind of fitting: In the Books of the Raksura, the Arbora are described in loving detail as craftspeople, and I’m sure they’d approve of the kind of work we’re trying to do here. I hope that in a few years our Dublin 2019 community project will have been only the start of something that’s become a permanent fixture at Worldcons and maybe beyond them.

While we were all busy putting together our tree, another community project was quietly taking shape on the other side of Warehouse 1. The ingredients: roughly 15 metres of free wallspace, a couple of rolls of paper, and a variety of drawing implements – markers, felt-tip pens, crayons, colour pencil, and pastels. With the help of the Art Show team, I also made sure some of the artists exhibiting in the Art Show would make a start filling all this white space up, to encourage others to follow suit.

As should be expected by now, I totally failed to take any pictures. The end result had loads of interesting things on it. Here’s a few in-progress pics provided by Mair Abram: 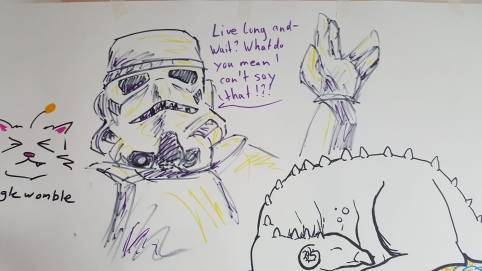 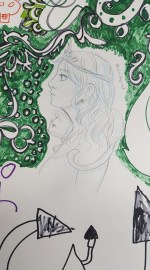 I’ve received another lovely set of pictures from Shana Worthen. She took quite a few pictures on Saturday as well as on Monday. Here’s some of Saturday’s crop:

Lots of marks being made – I love how the kids in particular are totally unafraid to add their squiggles!

Story Time! – Aaaaalll the ribbons, and a look at Registration. 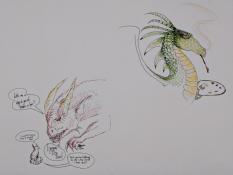 Dragons making their mark, and wondering why they’re not feared.

Cat in the jungle.

First part of the wall.

Dragons and books, of course!

Making marks, making mistakes – I should embroider that for my craft room.

Another reading dragon, isn’t he lovely?

And a close-up, just because.

And here’s more from Monday:

Who’s that on the bottom right?

and a valiant effort to get the long wall in one picture – that’s about 10 meters of drawing space right there!

As promised, I’ve been collecting some of the pictures that have been taken by people not me. First of all, Cora Buhlert posted her haul over at File770. There’s some lovely details to see. Thanks a lot, Cora, and I love that you’re sharing this with the much wider audience of File770!

The next set was taken on Friday by Anna Stefankova, one of the convention photographers: 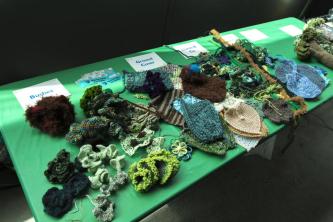 All the bits and pieces! 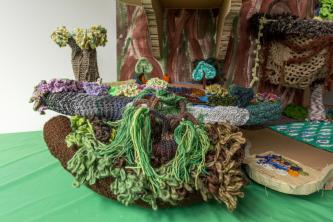 Where the waterfall comes from

another hyperbolic bush is created.

Already happy about this – although I had no idea where this would lead!

Simon Bubb, another of the convention photographers, came by on Monday to take pictures of the finished project. All images below are copyright Simon L. Bubb:

I think this one is from an earlier visit … 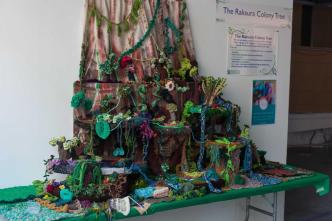 And another viewpoint, together with the lovely Dublin 2019 signage – I adore the design, and that we managed to have it be so consistent!

The full frontal view – so many things to see! 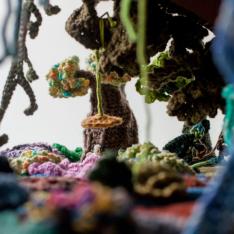 What kind of monster is hiding here? Looks like a fairly friendly monster to me! 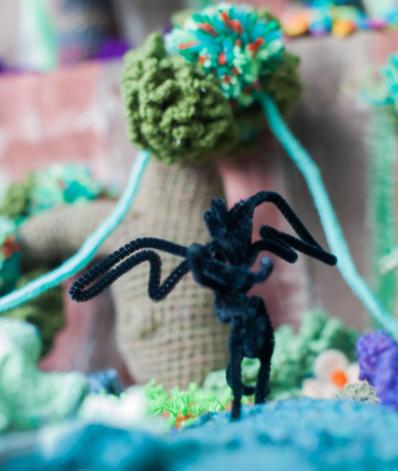 That’s probably the line-grandfather, made from chenille sticks! 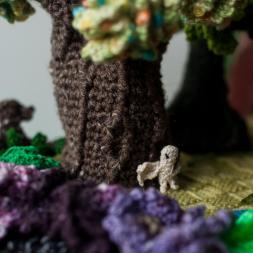 Tiny Raksura hiding between the trees. 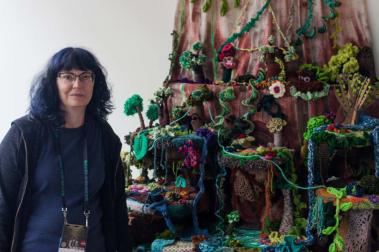 Martha Wells in front of the finished model.

Here’s another set of lovely pictures taken on Monday by Shana Worthen:

The whole tree basking in the sunshine. 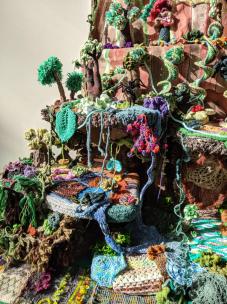 Detail of left side.

Right side with paper tree and waterfall. 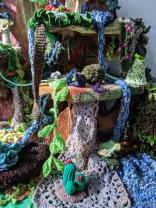 Love the cacti at the bottom, and the vine with flowers at the top right!

The middle with the entry hole. 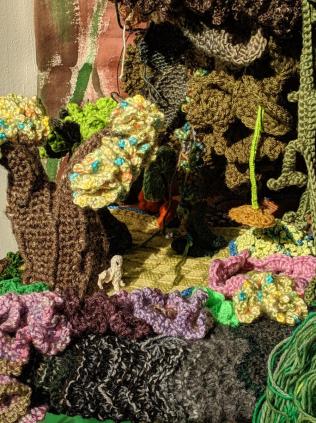 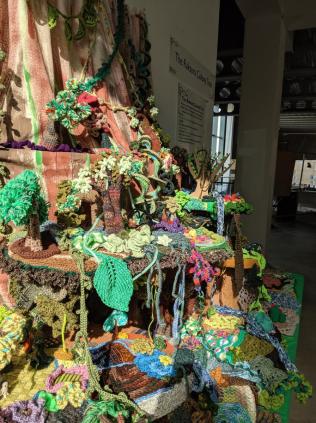 Side view from left side.

More details. There were so many things to see!

I love all the detail shots, and seeing all the ways my original vision for this got extended in unexpected directions. There was a paper tree! A chenille stick Raksura! Lots and lots of random little things that brought the model to life. I’m very happy that I’ve been able to inspire the kind of community we ended up having around this project.